I wrote this blog post with the intention to review and compare some evaluation metrics typically used for classification tasks, and how they should be used depending on the the dataset. I also show how one can tune the probability thresholds for the particularly metrics.

You can find the complete code associated with this blog post on this repository:

When making a prediction for a two-class classification problem, the following types of errors can be made by a classifier:

Accuracy simply measures the number of correct predicted samples over the total number of samples. For instance, if the classifier is 90% correct, it means that out of 100 instance it correctly predicts the class for 90 of them.

This can be misleading if the number of samples per class in your problem is unbalanced. Having a dataset with two classes only, where the first class is 90% of the data, and the second completes the remaining 10%. If the classifier predicts every sample as belonging to the first class, the accuracy reported will be of 90% but this classifier is in practice useless.

With imbalanced classes, it’s easy to get a high accuracy without actually making useful predictions. So, accuracy as an evaluation metrics makes sense only if the class labels are uniformly distributed.

Precision and Recall are two metrics computed for each class. They can be easily explained through an example, imagine that we want to evaluate how well does a robot selects good apples from rotten apples There are \(m\) good apples and \(n\) rotten apples in a basket. A robot looks into the basket and picks out all the good apples, leaving the rotten apples behind, but is not perfect and could sometimes mistake a rotten apple for a good apple orange.

When the robot finishes, regarding the good apples, precision and recall means:

Precision is about exactness, classifying only one instance correctly yields 100% precision, but a very low recall, it tells us how well the system identifies samples from a given class.

Recall is about completeness, classifying all instances as positive yields 100% recall, but a very low precision, it tells how well the system does and identify all the samples from a given class.

We will see further ahead how to get the best out of these two metrics, using Precision-Recall curves.

Typically these two metrics are combined together in a metric called \(F_{1}\) (i.e., harmonic mean of precision and recall), which eases comparison of different systems, and problems with many classes. They are defined as:

Note that you need to measure this for every possible class in your dataset. So, Precision and Recall metrics are appropriate when you are dealing with imbalanced classes.

These two metrics are somehow related to Precision and Recall, and although not often, I saw them being used a couple of times in NLP-related problems:

Sensitivity: is the same as recall, defined above, can be seen as the extent to which actual positives are not overlooked, so false negatives are few.

Sensitivity therefore quantifies the avoiding of false negatives, and specificity does the same for false positives.

There some scenarios where focusing on one of these two might be important, e.g:

While defining the metrics above, I assumed that we are directly given the predictions of each class. But it might be the case that we have the probability for each class instead, which then allows to calibrate the threshold on how to interpret the probabilities. Does it belong to positive class if it’s greater than 0.5 or 0.3 ?

A Precision-Recall curve is a plot of the Precision (y-axis) and the Recall (x-axis) for different thresholds, much like the ROC curve. Note that in computing precision and recall there is never a use of the true negatives, these measures only consider correct predictions

Train a model for classification

Comparing the Accuracy vs. Precision-Recall with imbalanced data 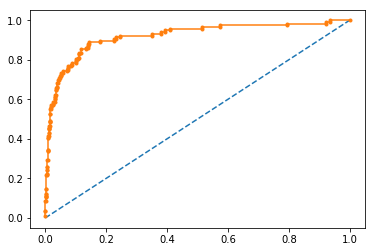 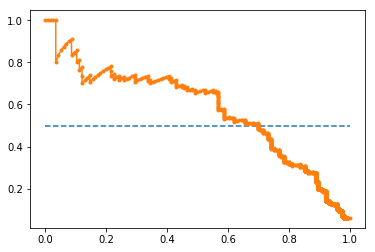 If you have an imbalanced dataset accuracy can give you false assumptions regarding the classifier’s performance, it’s better to rely on precision and recall, in the same way a Precision-Recall curve is better to calibrate the probability threshold in an imbalanced class scenario as a ROC curve.