KONVENS is an annual conference, which gathers together the computer scientist and computational linguist community working with the German language.

This year’s edition of KONVENS was held in the city of Erlangen, Germany, at the Friedrich Ebert University. The conference lasted for 4 days. The first day was reserved for tutorials and workshops, while the following days had presentations and poster sessions, coffee breaks and networking opportunities in between to motivate communication, keep up the good mood, and get to know each other.

We participated in one of the shared tasks for this years conference and presented a poster at the conference.

This year’s workshops included a data challenge, GermEval, consisting of two shared tasks, in the vein of SemEval but focusing on German NLP tasks. The two proposed tasks were:

The Comtravo data science team participated in the Hierarchical Classification task. The challenge consisted of a hierarchical document classification task where the hierarchical structure of each document’s label needs to be captured. The documents were short descriptions of books, and one needed to classify them into the many possible categories. 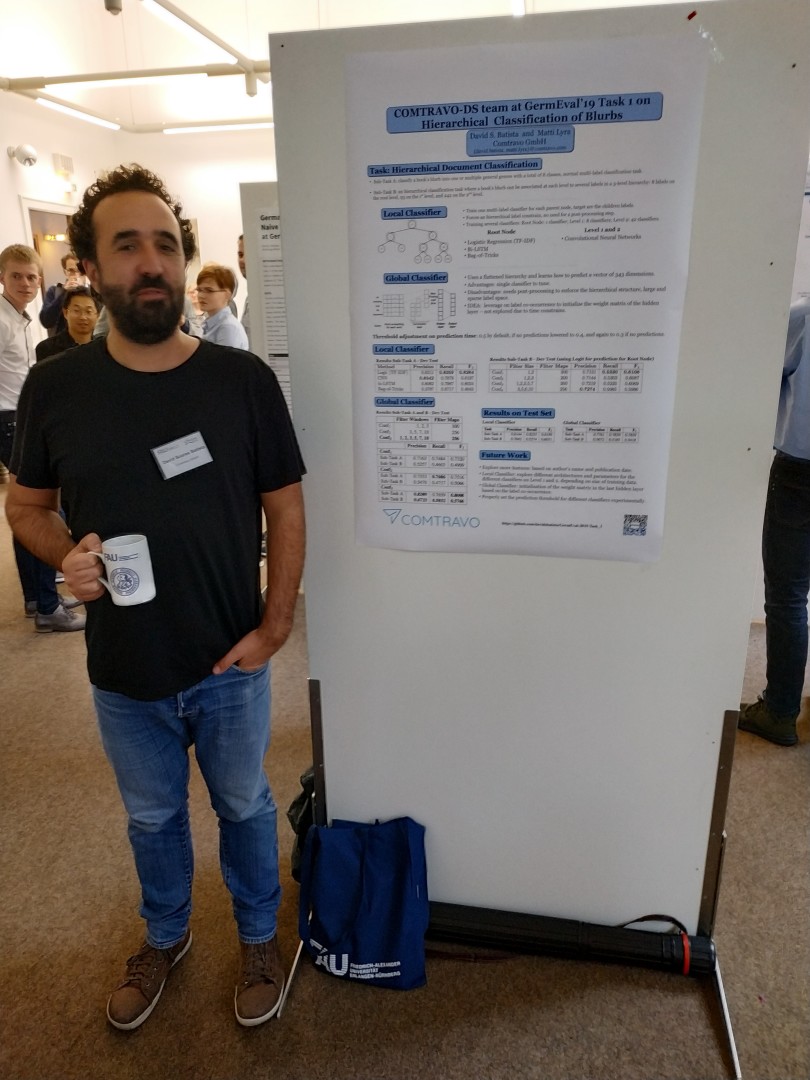 The task was further divided into two sub-tasks, one targeting only the first level of the hierarchy (Sub-Task A), and the second targeting the second and third levels (Sub-Task B). In our approach to the task, we explored two different strategies.

The first one was based on a more classic machine learning approach, a logistic regression classifier with TF-IDF weighted vectors. The second approach was based on Convolutional Neural Networks for text classification.

We still had many extensions and ideas to add to these two baselines that were worth exploring, but due to time constraints, we only submitted the baseline systems for other ideas worth exploring.

One curious aspect of both winning solutions for this challenge was that they used totally different approaches for the task. One was based on state-of-the-art neural networks for seq2seq tasks, and the other one was based on SVM and TF-IDF weighted vectors for text representation.

You can read the papers of both best winners here:

The days after the workshop were dedicated to several topics in the field of NLP applied to German. Having a mixed community of computer scientists and computational linguists results in a diverse type of research work. I will briefly list some of the papers that caught my attention.

Koppen et al., presented a paper on Label Propagation of Polarity Lexica on Word Vectors, an automatic method to expand sentiment lexicons for tasks such as sentiment analysis.

There was also research done on a more linguistic oriented perspective, which I found interesting. Metaphor detection for German Poetry analyzes a manually created dataset of adjective-noun pairs from expressionist poems, annotated with metaphoricity and a method to detect metaphors in poems.

Although the conference is small compared to other broader academic NLP conferences such as EMNLP or ACL, I believe KONVENS is the right place to discuss and follow the research on NLP applied to German. Looking back at the conference throughout the last few years, it has definitely grown.

The data challenge workshops are also an interesting playground to apply and explore new methods and provide open data for the community.

I’m looking forward to the next edition, which will take place in Switzerland, co-located with SwissText.